Independence Day has arrived in the United States.  If you are blessed with clear skies tonight, spread a blanket away from city lights, and watch the sky just after sunset.  You may see a shooting star, as part of a meteor shower in the constellation Draco.  It’s the dragon Minerva hurled into the heavens during a battle between the giants and the gods.  Draco hogs a large part of the sky beneath the Little Dipper and the North Star.  Until dark, for your reading pleasure, journey back to 1975 for a different Independence Day beside Lake Michigan, surrounded by miles of dunes, inside a green tent, beneath a starry sky…. 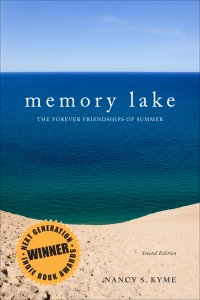 New cover for the Second Edition. August is the official release date.

“…We absorbed the quiet, staring at the star-studded sky, waiting for the meteor shower.  I blinked at the mass of lights, unable to decipher the few constellations I knew.

“Try not to focus too closely on any single cluster,” Jenny advised. “Let your eyes roam.”

“There!” Nancy said. Her arm ascended like a black cannon aiming for the multidimensional heavens.

“I saw it!” Susie blurted. “My first shooting star.”

“These are the best kind of fireworks,” Christie said.

“There is Cassiopeia.” Nancy drew a flat W in the air to match the dots.

“Good one,” Jenny lauded. “In Greek mythology she was queen of Ethiopia.  And would have been considered beautiful if she had not been so boastful. The Romans believed the Gods chained her to her throne as punishment then placed her in the heavens upside down for all eternity. But,” she added through a heavy, yawn, “the Arabs think that constellation is a kneeling camel.”

We pondered the boastful queen and the dark eternity of space while Jenny’s breathing slowed, perfectly matching the cadence of lapping water.

“And the North Star,” Sarah added, barely making a sound. 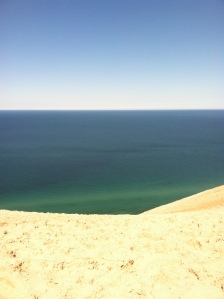 My sister took this photo from the top of Sleeping Bear Dunes last week.

My shoulder ached from a clump of sand. I gently pounded the musty cloth until the grains beneath shifted into submission.

Christie exhaled through a breathy whisper, “This is my favorite camping trip.”

“This is my first camping trip,” Susie said.

I thought hard, guessing the same, though it didn’t seem possible after all the nights spent in the little red pup tent, or the summers at Papa’s cottage, and my years at camp, plus late-night parties back home involving kegs of beer in cornfields.

“I’ve spent plenty of nights out,” Tori clarified. “But never on a camping trip.”

I nodded along thinking this best described my experience as well.

“It’s tough to get better than this,” Nancy said. She leaned over to swat my arm. “But we can always try.” I stared at her silhouette, wondering what she meant. “How ’bout coming on the canoe trip with us Thursday?”

“There’s another one?” I stammered.

“Doesn’t anyone else want to go?” I pleaded for a volunteer.

“Negatory there, Big Nance,” Tori uniquely declined. “I have an aversion to rivers.”

“Soccer is fun.” I turned defensive, though I had only signed up because I’d already taken everything around the lake for the first session.

“We’re trippin’ down the Crystal River,” Lori said. “No portages. Perfect for first-timers. Why, last week we had nine portages, ended in a small lake, and carried our canoes along the same route once used by the Indians. It was fun, but grueling.”

“Truth is,” I said, gaining courage from Tori’s declaration. But my voice erupted far too loudly. Clamping my mouth shut, I glanced at Jenny.  Our counselor lay undisturbed. I pressed on, more softly, while staring at the reflective water. “I like being near the big lake. There is always a nice breeze and there are no mosquitoes.”

“It’s okay to feel that way,” Christie said. “The lake makes you happy.”

I faced her just as she turned to face me. Her steady gaze and certain tone added weight to an otherwise simplistic statement. “Gymnastics make me happy,” she added.

I nodded along, sensing the glimmer of something wise and meaningful. We heard Jenny’s sleepy voice paraphrasing a mish-mash of things we’d learned in Sunday School. “If you find yourself in an unhappy situation, offer sacrifices of joy and soon you’ll dwell in the house of the Lord.”

“Heaveee,” Lori sighed. We grew silent. The wisp of a bat or the wings of a moth brushed the outside of the tent. In the distance an owl hooted.

“That beats sacrificing a goat,” Tori whispered and we started to giggle.

“Does sacrifice mean we have to give up some happiness?” Sarah asked.

We waited patiently in case Jenny was thinking. We heard only the deep sound of her breathing.

“It’s about acting joyful even when you don’t feel like it,” Nancy said.

“Which is freaking hard to do!” I snorted.

“We dwell in our thoughts,” Nancy said. “Good thoughts are like dwelling in the house of the Lord. When we’re angry or sad we leave it. So, offering up some joy gets you back. It’s all mental, you know.”

“You’re mental,” Cindy said, and the rest of us snickered.

“Guys,” Christie implored, “have any of us faced any real hardships?”

“If having brothers is a hardship, I have plenty,” Lori said.

“So maybe it’s only the little things that matter right now,” Christie insisted. “Like that time I couldn’t do a roundoff back handspring.  Schmidty, you made me realize it wasn’t worth being unhappy about.”

I shrugged, unwilling to take any sort of credit.

Lori gasped, “Like the time my mom made a pass at my date. Who knew I should have fought back with joy?”

Our mirth spilled over. Gripping our sides and covering our mouths, we laughed at nothing and everything, even each other, until tears filled our eyes. We could only go so far into the philosophical before the prospect of life’s deeper meanings thrust us into absurdity. It took a while to exhaust ourselves, but we eventually did.

“Schmidty,” Nancy whispered. “Why don’t you bottle up some of that joy from dwelling around the lake and offer it as a sacrifice on the canoe trip.”

“Wow,” I breathed, stunned by her argument. The idyllic weather and the coziness of the tent had won me over. It seemed nothing could go wrong. “Okay,” I agreed, snuggling further into my cotton-flowered sleeping bag, away from the open flap. I wiggled into a trough in the underlying sand and closed my eyes, anticipating a restful night.

Excerpt from Memory Lake; The Forever Friendships of Summer, Chapter Twenty-two, “Promises in the Dark”.   Click on the words in red, above, for more detail.

1 thought on “The Best Kind of Fireworks…”

This site uses Akismet to reduce spam. Learn how your comment data is processed.